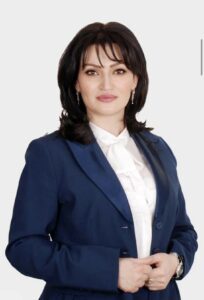 2020:  Doctor of Philosophy (PhD) in Pedagogic Sciences from a  Regionally Accredited College or University in the United States of America.

2018: Defended of her doctoral thesis Armenian National Agrarian University on socio-economic issues in the field of education.

2016: Received a Magister (Master’s) degree in marketing and governance from the Armenian State University of Economics.

2011: Received a doctorate from the Crimea State University.

2000-2003: Continued her education as a fellow at the Kh. Apovian Armenian State Pedagogical University (via remote learning).

1995-2000: Attended the Kh. Apovian Armenian State Pedagogical University. Graduated from the Faculty of Biology and Chemistry with honors.

1994: Graduated from the Number 13 School of Gyumri (gold medal recipient).

2011: Received the title of docent for her work in the field of pedagogy throughout her years of matriculation.

2009: Defended her dissertation and received her Ph.D.

2020: By the order of the CGMS the RA,  appointed Deputy Chairperson of the Council for the specialty of theory and history of Yerevan University.

2019: Served as a deputy to the president of the Confederation of Trade Unions of Armenia.

2018: Accepted into the Armenian National Agrarian University as a docent.

2016: Member of the governing council of the Yerevan State College of the Humanities.

2016: Member of board of the governing council of the Number 172 School of Yerevan.

2015-2016: Worked as an advisor to the head of the state food security service of the Republic of Armenia. 2012: Was reelected president of the employee union of the Kh. Apovian Armenian State Pedagogical University.

2011: Lecturer at the Apovian Armenian State Pedagogical University in the pre-school pedagogy and pedagogical methodology faculty. She began her work with the employee union in 1996.

1996-2007: Served as the deputy president of the employee union of the Kh. Apovian Armenian State Pedagogical University. Scientific Contributions Has authored 35 scientific papers, one pedagogical review, two encyclopedias, one monograph, and one school textbook.

2016-2018: Member of the civil committee of the Republic of Armenia Ministry of Diaspora.

Since 2008, member of the gender committee of the Confederation of Trade Unions of Armenia.

Since 2006, member of the board of the directors of the Confederation of Trade Unions of Armenia. Scientific Publications 1. An overview of the fundamental problems of the delivery of education.

2019: Received a certificate from the Houysi Gamourch [Bridge of Hope] community organization of participation in an educational workshop focusing on pedagogy from June 18th to the 21st . Has participated in a series of recertification sessions and workshops focusing on scientific-educational, governance, standardization and certification, and human rights defense issues.

2018: Recipient of the gold medal dedicated to the 2800th anniversary of the founding of the City of Yerevan.

2015: Recognized by the Armenian Labor Union Confederation for her contributions to the labor movement. June 9-10,

2015: Received an Achievement Certificate Award for her participation in the Modern School Teaching Tools and Techniques workshop.

In 2012, received the Kh. Apovian gold medal for her contributions to the fields of science and pedagogy.