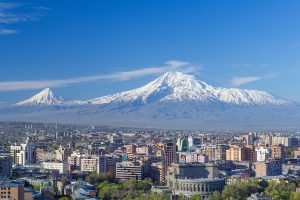 Glendale, CA – Several years ago a small group of committed Armenians worldwide, began planning the establishment of a democratically-elected Diaspora Armenian Parliament (DAP). The launch of this groundbreaking initiative shall serve to integrate all Diaspora Armenians in a unified structure. Once this goal is accomplished, the leadership of the Diaspora Armenian Parliament, and the Republics of Armenia and Artsakh, elected by their respective constituencies, can claim for the first time that they represent all Armenians worldwide and make collective decisions on behalf of the entire nation.

This has been the elusive dream of all Armenians for several decades, if not centuries. Yet, given the dispersed nature of the Diaspora, it has been difficult to bring this cherished dream to reality.

The initiating group has planned a two-step process for the establishment of the Diaspora Armenian Parliament:

The HyeID non-profit organization, already formed in California, will expand to Armenian communities throughout the world, including Armenians living in the Republics of Armenia and Artsakh.

The HyeID organization has three objectives:

a) Offer an identification HyeID card to all Armenians around the globe, including Armenia and Artsakh, so they could benefit from discounts provided to them through their purchases of products and services, such as airlines, hotels, restaurants, shops and many more. The discount benefits three parties: the HyeID cardholder, the HyeID non-profit organization (to finance the Diaspora Armenian Parliament and its Pan Armenian humanitarian projects), and the cardholder’s affiliated or preferred organization.

b) The information about the cardholders will form a worldwide Armenian database which shall enable unprecedented collaboration among those involved in science, technology, business, culture and national security.

In summary the benefits of HyeID are:

1) Registration to vote for the future DAP;

5) Self-funding of DAP through the discount network;

DAP is formed through local elections held in each geographic region. The regions are created by having an equal number of Diaspora HyeID cardholders eligible for voting, based on the democratic principle of one person one vote. All HyeID cardholders, in the Diaspora, who are 18 or older can elect or be elected to DAP.

The benefits of DAP are:

2) Create a synergy with all existing Armenian organizations;

3) Provide the Diaspora with a representative and collective voice and the ability to participate in Pan Armenian issues;

7) Coordinate and advance the national objectives of the Diaspora, Armenia and Artsakh;

8) Organize repatriation to the homeland.

“The Diaspora Armenian Parliament will not compete with any of the existing Armenian organizations, but will complement their efforts, giving Armenians a greater strength to resolve their litany of challenges,” stated the HyeID board members.

The HyeID board members are:

The HyeID Board of Directors “call on all Armenians worldwide to become part of this ground breaking initiative and fulfill the much awaited realization of a dream of Diaspora Armenians to have a democratically-elected unified and self-sufficient structure.”